Necrobarista – Coffee with a double dash of corpses

Ah, Melbourne. The coffee capital of the world. Also the city of my birth, but you’re not here to read about me.

Route 59 Games, a Melbourne-based developer, has drawn inspiration from what is regularly voted as the world’s most livable city to create a 3D visual novel about death and necromancy. And coffee.

Necrobarista is available now on PC, and is coming soon to Playstation 4 and Switch. I received the PC version for review.

Decaf soy latte with an extra shot and whipped cream

It’s better to walk into it without spoilers, but basically Necrobarista follows the trials and tribulations of Maddy, a young Melburnian running a café where the dead spend their last night on Earth. The team grapples with letting go of loved ones, almost entirely through the use of puns and meme-language. Like all the best people in hospo, Maddy and her staff are dripping in sass and consume dangerous amounts of coffee.

And hey, historical bad boy Ned Kelly is a main supporting character, which is great. He’s also wearing shorts, which I don’t know how I feel about.

It’s important to go into Necrobarista with the right expectations, as it does exactly what it says on the box. This is a visual novel. It’s like a reading a book on the screen, accompanied by pretty visuals. However, unlike many examples of the visual novel genre, Necrobarista’s storyline doesn’t branch. You’ll find no choices to be made, and no alternative endings to discover. But, to be honest, the story is interesting enough that I didn’t mind the lack of choices so much.

The more unusual element of interaction are the collectible highlighted words. These words each signify a theme or character. Icons relating to each can then be used to unlock further text-only side stories. These side stories can then be accessed during the sections between chapters where you can move around the café building. I’ve made this sound more complicated than necessary, because it is. I couldn’t help but think that the side-stories could have been better served by an unlockable menu codex, as old-fashioned as that would be. 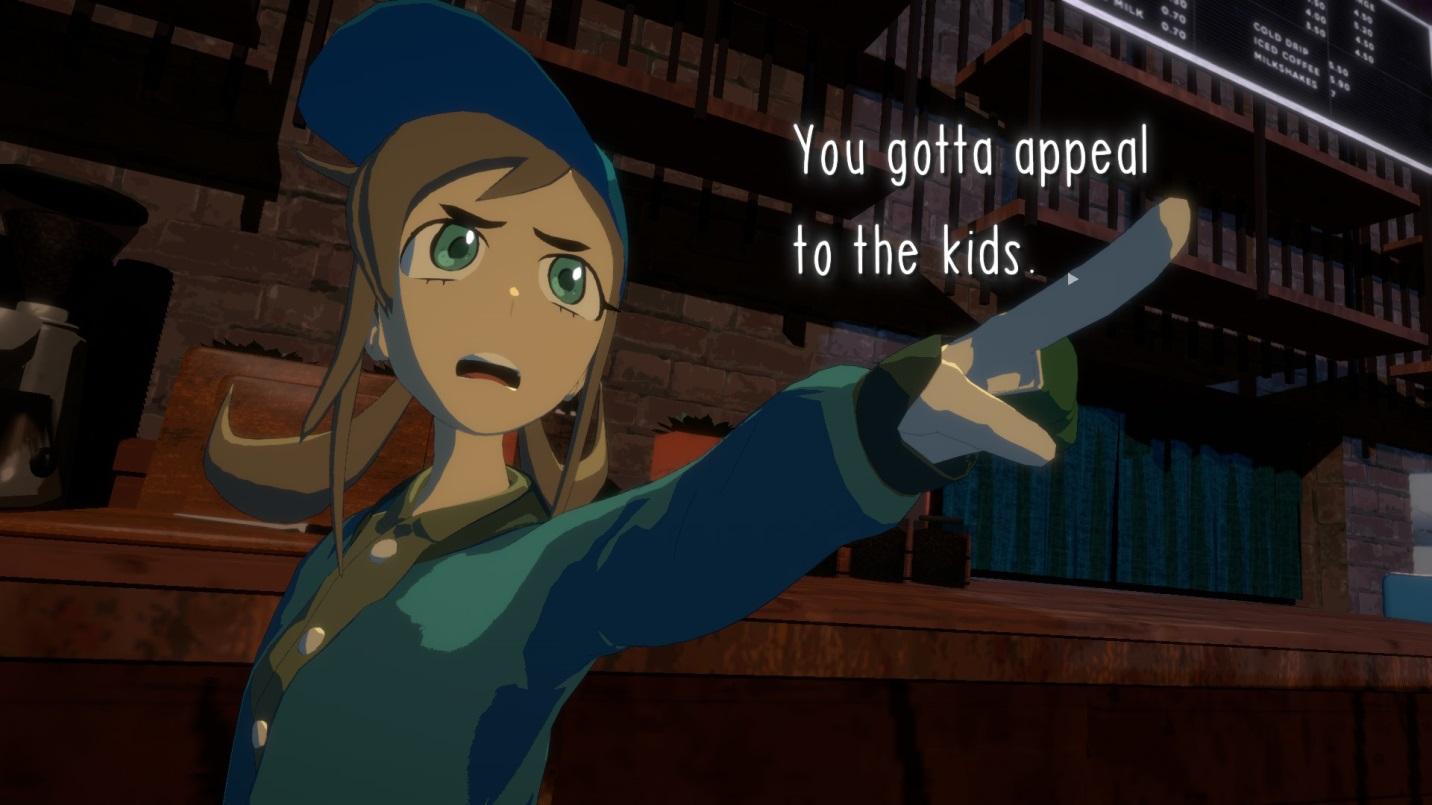 Necrobarista is incredibly innovative visually. While it’s not the only anime/anime-inspired visual novel on the market, it’s done in a way that feels both anime and not anime simultaneously. Ain’t no anime tropes here.

It’s downright amazing what Route 59 Games have managed with the cinematography. Every shot is arranged with the care of a film director. It’s like watching the 3D equivalent of a storyboard, with movement peppered throughout for maximum impact.

Also genius is the treatment of text. The text isn’t constrained to old-fashioned text boxes, but rather floats across the action, with its own aesthetic value beyond the delivery of meaning.

The nuanced soundtrack composed by BAFTA-nominated Kevin Penkin also adds an extra layer of cool, with no songs that I disliked. I can’t stress how important this is in visual novels where music repeats on loop.

Life’s too short to always be serious

I was stoked to see that Necrobarista is set in Melbourne, and while Necorbarista doesn’t beat you over the heading with its setting beyond the odd reference, what better expression of Melbourne culture than the café scene? Never having worked in a café, I can’t judge how the experiences of these necromancer baristas align with the real deal (baristas I mean, not necromancy. Unless?). Most however will be able to strongly relate to the shared human experience of mortality and internet memes.

As you would expect, Necrobarista spends much of its five hour-ish runtime wrestling with death, with a surprising amount of humour. What comes after death? What would I sacrifice for more time? Should I be judged for my choice in coffee?

The characters are all funny and likeable, but continue with their quips throughout the runtime. This meant that some of the heavy moments didn’t pack the punch that they might have done otherwise. If I had to provide an analogy, Necrobarista is like talking with friends who use humour and memes to avoid directly expressly their feelings.

Perhaps it’s a more realistic representation of how we millennials express our feelings than I have given it credit for.

There’s so much supernatural mystery to unpack here, particularly around the rules of Necrobarista’s world and its treatment of the afterlife. Some of these mysteries are answered, but definitely not all, so it’s encouraging that there is more Necrobarista on the way. Some of the engaging minor characters, like the sultry Samantha who is introduced and never heard from again, will also feature in future chapters to be released to owners of the base game for free.

Another fact about me that you didn’t ask for – I don’t like coffee. I’m a hot chocolate kind o’ gal.

But I do like Necrobarista, and I want to see more of it.

80% Worthy of the city of my birth
2020review
Share FacebookTwitterReddItWhatsAppEmail

Hannah is a policy advisor with a secret past working at a videogame store.

While known for her fanatical devotion to the Dragon Age franchise, Hannah also enjoys quality time with arty Indie games and JRPGs - particularly if they offer a romance option.

Halo 3: ODST and Night in the Woods are coming to Game Pass

Hannah is a policy advisor with a secret past working at a videogame store.

While known for her fanatical devotion to the Dragon Age franchise, Hannah also enjoys quality time with arty Indie games and JRPGs - particularly if they offer a romance option.

Samsung is enhancing your podcasts with the Galaxy Buds Pro releasing…

Samsung is unleashing the Galaxy S21, S21+, and S21 Ultra this month