I don’t care what anyone says, if you can make sneak Bee Gees lyric references into your review subtitle then the product is either pretty damn good or the reviewer is having some sort of breakdown… It’s the first one. If my poor taste in music lyrics hasn’t put you off then stick around and I’ll tell you about the wondrous little beasts that are Logitech’s G560 Lightsync PC Gaming Speakers.

When it comes to peripherals, Logitech have been carving things up like John Travolta in Saturday Night Fever. No, that’s not an insult, they’re winning design awards around the world, and producing high-quality gaming wares that aren’t going to force you to dance for money, which is lucky because if I had to do that I’d be in serious debt! My friend told me that he hooked these bad boys through a Graham Slee HiFi preamp to give them a bit more juice and body. He is so glad he did, experiment with your set up and see what you can do!

Anywho, that’s enough weird dancing references for one day; time to get back to the speakers.

When you first get your hands on the G560 speakers, you’re gonna to notice that it’s a pretty damn big box that they come in. The stereo speakers themselves aren’t overly big, it’s the badass subwoofer that is taking up all of the real estate in the box. The stereo speakers are about 6 inches squared each, but the sub comes in at a huge 16 inches, and has plenty of weight to it. If you are gaming late at night and someone tries to break into your house, throw the sub at them; you are bound to incapacitate, and you can get straight back to gaming. 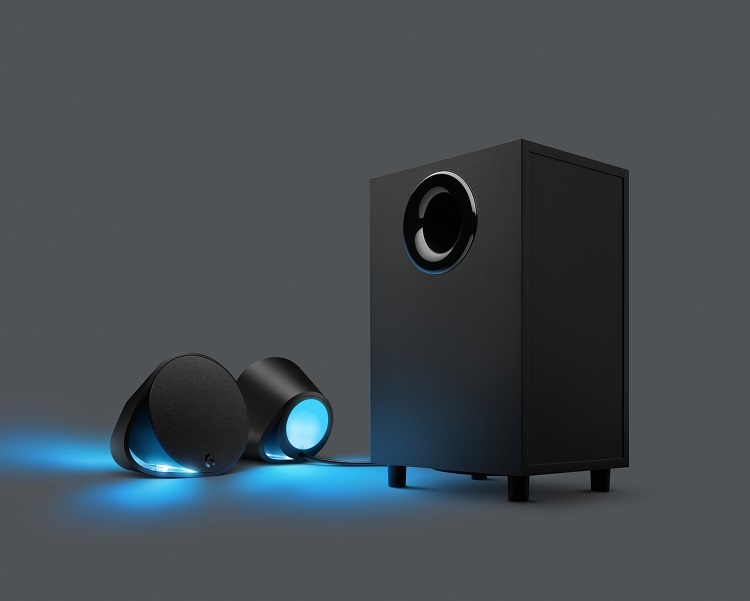 Once everything is out of the box, it’s pretty much plug and play; gotta love the smooth Logitech experience. Connect your stereo speaker up to the sub, plug the sub in to your PC, download the software, and you are good to go. You can plug the speakers into your PC by 3.5mm aux cable or USB, though if I were you I’d go with USB, because you’re going to get a bit more functionality.

Once you’re all set-up the first thing you’re going to notice is the light-show that the G560s are going to treat you to. The RGB lighting is powered by the same Logitech software that you will find with most of the Logitech-G kit these days, but it goes beyond that. Logitech have allowed developers to make use of the open software development kit so they can customise the lights based on what is going on in game. For example, if you’re playing Battlefield 1 the speakers will glow orange as you lose health. And, if your game of choice hasn’t received an update to work with these speakers, never fear; Logi’s software allows you to use screen sampler mode and selects four parts of your screen to customise with the speakers. You might have a health bar or resource bar in one part of the screen that you might like to change colour on the speakers as something increases or decreases. Thanks to screen sampler mode, you can do that, and choose what the colours start from and change to. Colour me impressed.

For those of you who wanna get the party started, then listening to music through your PC will transform your gaming room into a disco-lovers utopia; the lights will flash and change colour based on the music you are listening to. And while the stunning light-show is one thing, it’s nothing if sound performance isn’t there; they’re speakers, not strobe lights. Thankfully, unlike the contestants on a certain Netflix show, Logitech really have Nailed It. These speakers are capable of pumping out 240 watts of peak aural goodnessand trust me, the moment you first get sound through these speakers you will hear (and feel) their power.

Some customisation may be required initially though, because the default setup is pretty bass heavy. The downward-firing sub has some serious grunt to it, and creates body-rattling bass. In-game, that means some added punch to explosions and extra oomph to gunshots. It’s not just the bass that packs a wallop either; the stereo speakers do a damn fine job of backing up the sub, with crisp audio that creates a solid atmospheric experience in any game.

The quality of sound experience is in no small part to support for DTS: X surround sound. While these are stereo speakers, DTS:X creates a very good virtual surround sound effect for your PC. Yeah, it’s not as good as true surround sound, but for the price of these speakers you are getting something that really is close enough.

Whether you are wanting to dance the night away or just get some serious sound quality to your PC gaming, the Logitech G560 Lightsync PC Speakers have got you covered… head to toe in disco colours, with a powerful sound that would give anyone a high temperature on a weekend evening. And I think that’s pretty groovy..

Paradise Killer is releasing on PC and Switch September 5

Razer is getting fancy with their Quartz and Mercury collection