Back in 2014 HB Studios and Maximum Games released The Golf Club, the first big Golf game to hit the PS4 and Xbox One. The Golf Club was a serious Golf Simulation that didn’t have the flashy licences to bring real world players and courses to the game but managed to create a golfing experience that was just about as close to the real thing as you can get on a console. Obviously, if you’re after the exercise too but can’t get onto an outside court, you could have a look into getting a Golf Simulator to use in your home. But with regard to electronic golf, almost a year later EA released Rory McIlroy PGA Tour and not even the licensed courses and players could save what was a lazy, genuinely appalling effort from EA that quickly ended up in bargain bins around the world and highlighted how well The Golf Club managed to nail the core golfing experience. Just under three years on and HB Studios and Maximum have released their follow up with The Golf Club 2 and once again proven that they are the masters of the sport that is a good walk spoiled (well at least for people who play real golf as badly as I do).

The Golf Club 2 follows the same key formula of its predecessor. This is a serious golf simulation, there are no power bars to press to control your power and reduce the hooks or fades. Nope your entire swing is controlled using the analogue swing and boy can it be unforgiving! You’ll also only get minimal aids to help you place position your shot from the tee, fairway or aim on the putting surface. All you’ll have is a map of the hole to pull up and an indication on the screen as to the general direction your ball is heading and the ability to zoom up to see what is in the vicinity of where you are aiming but that is it, you certainly don’t get a marker on the ground to show you exactly where you are hitting the ball and no hint line to the hole on the putting greens. all the key decisions on the golf course are controlled by the player and then literally in your hands as your do your best to maintain a good swing through the analogue stick which is a hell of a lot harder than you think. 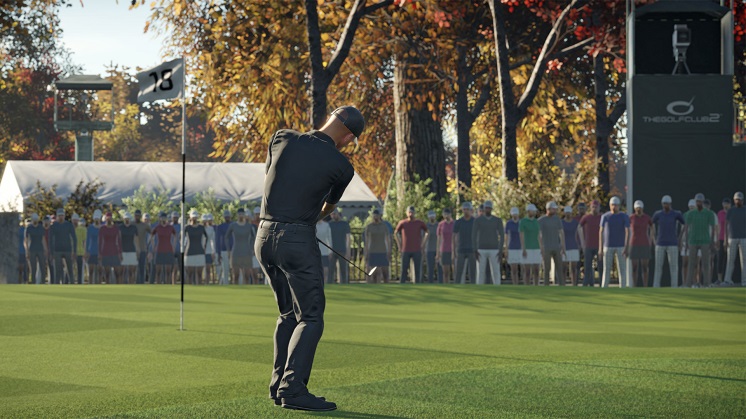 This time around The Golf Club 2 has made some improvements to help players with their skill level. There are 3 different types of clubs you can choose, Standard, Player or Tour. Standard clubs have less distance on them but are VERY forgiving on the swing and follow through, Tour is the most uncompromising set of clubs as they maximise your distance but require pinpoint precision through your swing on the analogue stick. As you’d expect, the player set of clubs is a balance of Standard and Tour. Within that set up you can also choose what clubs you want in your bag so you can customise your golfing set up to just the way you like it. Just be warned, when you make that step up to Tour clubs be prepared to hit the ball like a drunken Team New Zealand sailor celebrating their Americas Cup win.

This time around The Golf Club has introduced Societies and Tournaments. Societies is your chance to effectively create your own home Golf Club that your friends can join. You can set up your own logo and crest and then represent your Society out their on the links, you can also set up events that are just for your society and celebrate your members’ achievements. Tournaments can be either fully online against the creme de la creme from around the world or just with your mates. It’s a big step forward and allows players to compete online over a more sustained period than just the one course multiplayer we had in The Golf Club.

The next big evolution is a career mode. Career mode will see you complete an entire golf season in two different ways, the first is to create your own season and play in that or choose a predefined season created by HB Studios. Career mode goes from Levels 1 to 10 earning you winnings and points that can upgrade your clothing and gear plus allow you to unlock higher levels. It has a steady progression that makes it feel like you are going from Amateur golfer to fully fledged Pro. The higher the level the longer the season can be and the harder the competition will get. The good news here is that even though the competition gets harder your choice of clubs remains your own so you can stick to those standard clubs and sacrifice distance for accuracy but be warned that these courses get longer so to remain competitive you’re going to need those bigger clubs on hand. 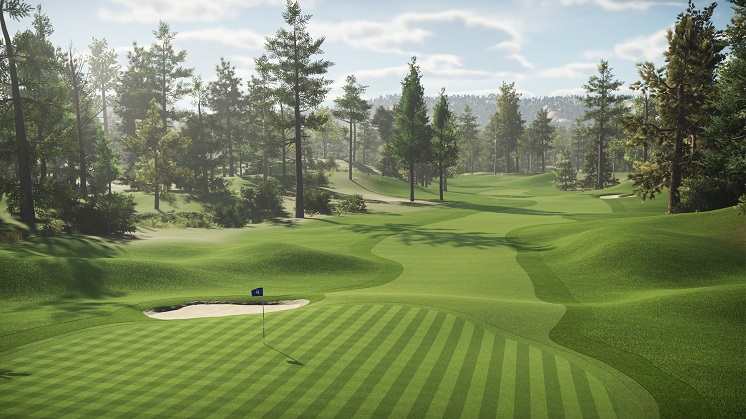 The other stellar feature carried over from The Golf Club is the course designer. This is your chance to create your own golf course rivaling anything that Jack Nicklaus or Greg Norman has created. You don’t need to be a golfing architect to build a fantastic golf course though because the initial setup of a golf is done by setting a bunch of parameters like the style of course you want, how hilly you want it, how many bunkers you want and how many water hazards are around. From there procedural generation creates your course and then gives you the tools to further customise it just the way you want it. Make the course more hilly, add golf clubs, helipads, marquees, spectator seating, toilets and even entire buildings. Pretty much any feature you can think of you can put on your golf course. Here’s a tip though, building a 100 feet high hill with water all around it and no real way to get over it isn’t funny it’s just being a dick, plain and simple. Same goes for creating a putting green where missing the cup from any angle sees the ball roll off the green entirely. Your course will be published for the world to search for and play on and they can give it ratings so if you create a frustrating monstrosity then players will rate your course poorly and no-one will come play on it. Unfortunately once you publish your course you can’t do anymore to it, if you realise later you’ve messed up one spot it you edit the course that just creates a duplicate and both courses will end up being published. PLEASE HB Studios give us the ability to delete old courses. That being said the course designer had some amazing creations in The Golf Club, there were thousands of playable courses with many showing the community has some people dedicated to creating meticulous replicas of world renowned courses like Augusta National and St Andrews.

Graphically The Gold Club has had some tweaks but it was a pretty Golf game originally and is still pretty. The courses look stunning with special mention required for the water which shines with the sun on it. There are a few frame rate judders at times but they mostly occur when the flyover starts on each hole. The player animations are fluid from start to finish which is what we’ve come to expect from HB Studios. If I really want to split hairs there is the odd time when you hit the green and your ball looks like it is floating above the green rather than rolling on it but that is a rare occurrence.

The Golf Club 2 was reviewed using code provided by the Australian Publisher.

Crash is Back, Alright!

Hades review – One Hell of a Game

Oppo has released the Reno4 series