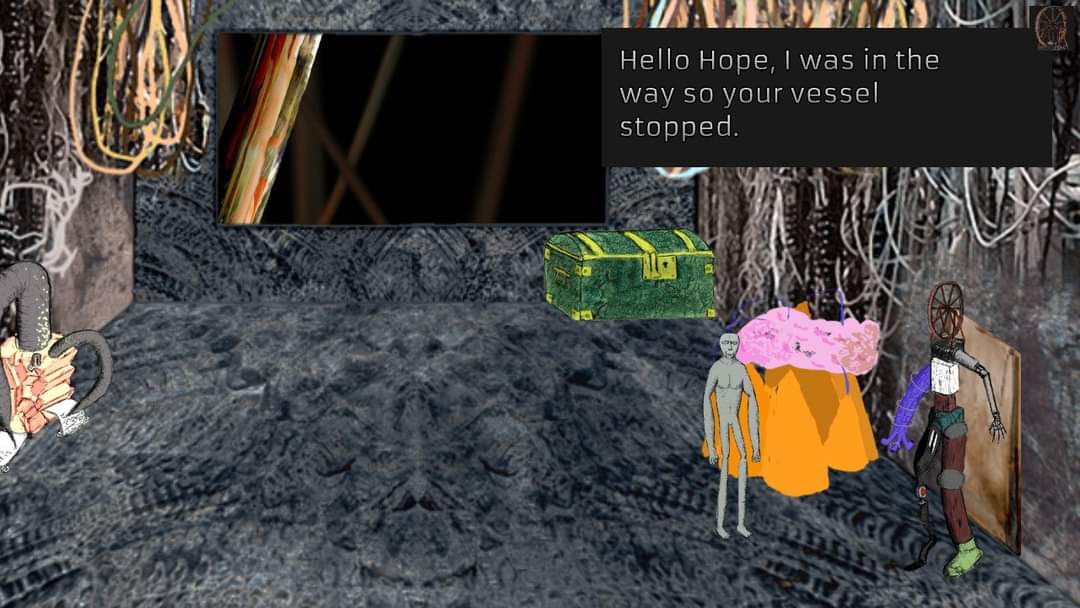 I’ve always been a big supporter of the idea that video games are a form of art. What that means, however, is that we’re bound to get some weird video games occasionally. I’m talking about the melting clocks of Salvador Dali, the yellow brick opium trips from L. Frank Baum, and pretty much anything David Lynch touches. Now we have Infini, a game about Hope.

Literally about Hope. You play as the anthropomorphic personification of hope. A winged humanoid creature who is stuck in Infinity, and wants nothing more than to get out, even if that seems impossible. The story plays out in a non-linear fashion, dancing around ‘the incident’ which first saw Hope trapped in Infinity. Along the way you will meet a range of other characters such as Technology, who has a wheel for a head, Memory, a helpful elephant and War. He has a gun face, because of course he does.

Infini looks, for lack of a better term, weird. It is hand drawn, with painted backgrounds, and while I’d like to be a bigger person and say I found it charming, I did not. It unsettled me in the same way that Salad Fingers, and Don’t Hug Me I’m Scared did. Yes, that is a telling reference to the deep YouTube holes I have found myself in, and no I do not recommend them.

Infini has what I like to call dream logic. It shouldn’t make sense, but it just does in the same way you don’t question dreams while you’re having them. So while the plot jumps around, leaving you confused, it’s much easier to just go with it and assume however you choose to understand the symbolism and story is correct.

You’re not playing for the story anyway, it’s all about the trippy visuals, and on point gameplay. The story is just the mayonnaise in the chocolate cake. It makes it better but if you think about it too long, you’ll forget you have a chocolate cake.

Infini is also a game figuratively about hope. Hope never gives up. Even 999,999,999 days after the incident, when he is emaciated, wingless, and missing an arm. It’s oddly charming, and honestly a refreshing reminder that sometimes you just need a little bit of hope and endurance, especially in the current world climate. For a character that unnerves me, I’m surprised how easy it is to connect with Hope, and his struggle to break out of a pattern.

Hope falls from the top of the screen to the bottom, and loops back around to do it all over again. Your goal is to get him into a portal without touching the barriers. Barriers form the level layout, and serve as the major obstacles you need to navigate around.

Here’s the trick, those barriers aren’t there if you can’t see them. And boy, that is some sort of motivational speaker’s tagline about life and I’m definitely not willing to unpack that in a game review.

Aside from controlling your fall speed, the first trick you learn in Infini is how to zoom out in the level. This opens up the whole level so you can see the possible paths to take. This is also how you make barriers appear and disappear. The trick is knowing where to position yourself, and how far to zoom out.

Now forget it all, because in a twist that not enough puzzle games utilise, once you’ve mastered the tricky shifting of perspective, you won’t need it for a few levels when you go back to basics. I am not a gamer prone to rage, but I had to put my switch down when I realised I had been overthinking everything.

At least I’m not alone. Infini has definitely been overthinking too. Zooming is not the end of your abilities. Flying, changing the direction of gravity, and hovering are just the beginning. My personal favourite, despite how much it hurt me, was the ability to switch between different dimensions which had different layouts of barriers. Move in one so that you can slip into the second without crashing, and so on and so forth.

With all the dimensions Infini seems to have, you’d think there would be one where the game doesn’t give me a headache or an existential crisis. And yet here we are.

As a spatial puzzler, Infini is unique. Even if you ignore the weird visuals and music, and the deep and far too meaningful story that I still don’t quite understand, the gameplay itself is interesting and captivating. It was a frustrating delight to play, and if you haven’t given it a go, you’re missing out. I’m not sure on what, exactly, but it’s something.

Witcheye is out now on Switch & PC

What should you buy? PS5 vs XBSX

January’s PS+ have been announced