If you have a betta fish pun, let minnow.

“Think Theme Hospital or Roller Coaster Tycoon but, ya know, an aquarium”  That one sentence from our editor was all it took for me to immediately demand to be the one to cover Megaquarium. But here’s the thing, and Brian’s not going to like this because he’s wrong; Megaquarium’s not like those games. It’s BETTER.

Megaquarium is the second game by Bristol-based developers Twice Circled, which explains some of the cute britishisms that appear every so often in interactions with patrons and staff. I’ve never heard the phrase “thrown a tizz” used outside of a BBC comedy show, and to my Kiwi ears it’s ridiculously adorable, and adds to the genuinely wholesome feel of the game.

Now normally when I play these types of games, I do what any good tycoon would do and figure out how I can maximise my profits. The first thing to go out the window, just like in real life, is the general health and safety of anyone who may be working in and or attending the business. But not with this game; Megaquarium has somehow made me care about about the little fishes, and it made me want to do everything possible to keep my little ones alive and healthy. This, of course, meant I had to keep my workers and my patrons happy. It was a strange experience for me, as I’m normally very cutthroat when it comes to Sims or Tycoon style games.

Tell me you never trapped your Sim in a swimming pool, or in a sealed room of windows surrounded by toilets and fridges, and I will name you a liar, sir. 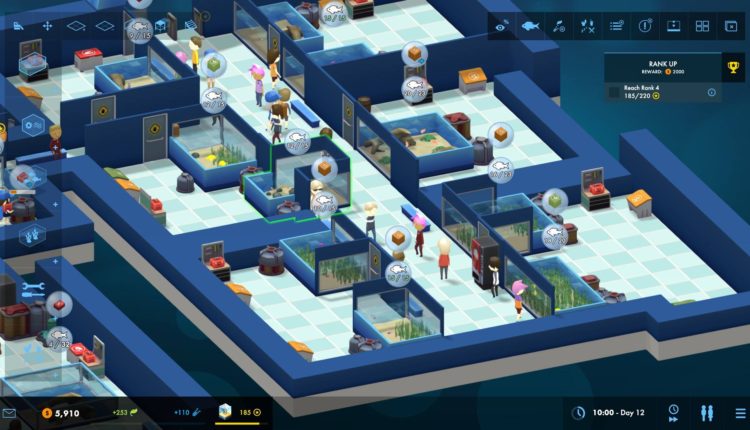 The thing I love about this game is that you actually have to research what you’re doing. You can’t just be going about chucking fish in tanks all willy nilly; you need to pay attention to the different species, what their needs are, how they have to have the water quality and temperature of the tanks… The list goes on. You need to make sure that you have the correct types of food, and to NEVER put certains species in the same tank. I don’t think I’ll ever get over the eels eating all of my rock crabs, or the tank of scavenger fish that died because it turns out that you don’t actually feed them directly, the scavenge from other fish – funny that. It actually hurt a little bit when I lost that tank, I got really attached to them… I’m a very sad person.

There’s three separate point earning systems. Eco points are for researching new species, Science points are for earning new equipment and Prestige points are how you level up. The higher you go, the more complicated tanks and equipment you earn. Points are earned by having interesting tanks with different ecosystems. Every species has a certain amount of the three point types you can earn when you have them in your store; you just have to make sure that lots of people see them and that they’re healthy. If you have a tank that has low water quality or fish that don’t look very healthy, you can actually lose points.

Maybe some people want to go to an aquarium to see disease ridden fish. We don’t know. Frankly, we don’t want to know; it’s a market we can do without. 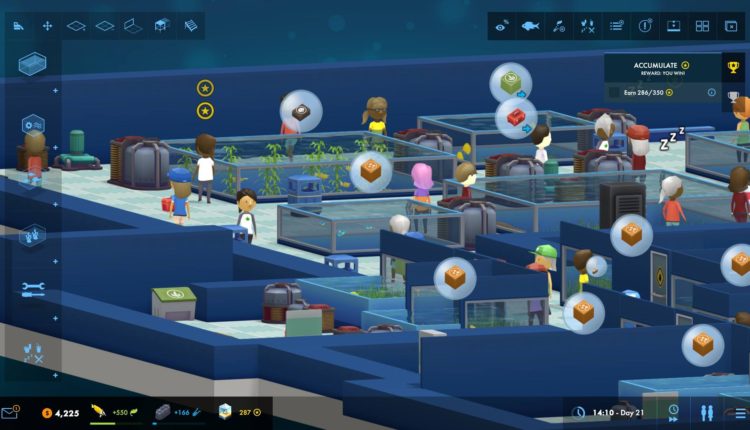 Unfortunately, the bigger my aquariums got and the more stuff that was added, the slower the game ran, and the hotter my computer became. It’s a good thing that it’s a bit cold here at the moment, because it got real toasty in my apartment. You can change the settings though, and if you have a good graphics card then you won’t have a problem with lag. It’s also a lot easier to use a mouse. At one point I lost my usb mouse (I’m a wreck of a person) and used the touchpad instead; oh boy were there some weird shaped rooms after that.

Currently the game has 10 levels, and you have to earn a certain number of prestige points before you can advance. The great thing is that not every level is just about running a store. There’s a couple of levels where you have to build a private aquarium with some very specific requirements, and you can change the difficulty level. Guys, this is a game about making aquariums that has a Brutal difficulty. I haven’t played this yet, because I can only imagine it involved actually getting fed to a shark, but I’m glad it’s there for those of you who long for that hardcore aquarium experience.

There’s also a sandbox mode if you just want to have a relaxing time building ecosystems for eels, which I call eelcosystems, and with a wonderfully chill soundtrack as the cherry on top. 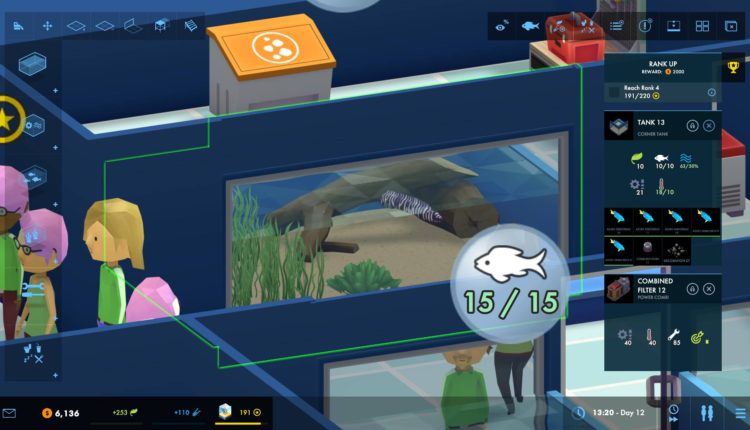 The thing is, that while it is a wonderfully cute game and I really like it a lot, it is a tycoon game. Once you’ve played a couple of the levels, you’ve pretty much got it down. They add task lists that you have to complete before you can move onto the next challenge, which is a nice touch and encourages you to have a wide variety of aquatic animals and different tank styles.

I played this game to relax after a particularly stressful day at work and it was so calming that I would seriously recommend this game to anyone who is so stressed out that they can’t even think.

There’s nothing fishy about this one; if you like tycoon sims, and you like… fish or whatever, Megaquarium is for you. Dive in.

Tegan moved to Wellington in 2010 to get a degree in Classical Studies and Philosophy and she totally gets lots of job offers because of it
Her favourite Pokemon is Snorlax and she has a hard time being mean to NPCs. Which should tell you everything about what she's like as a person.

Hades review – One Hell of a Game

Tegan moved to Wellington in 2010 to get a degree in Classical Studies and Philosophy and she totally gets lots of job offers because of it
Her favourite Pokemon is Snorlax and she has a hard time being mean to NPCs. Which should tell you everything about what she's like as a person.

Oppo has released the Reno4 series